60 Minutes Worships Salman Khan And So Do You 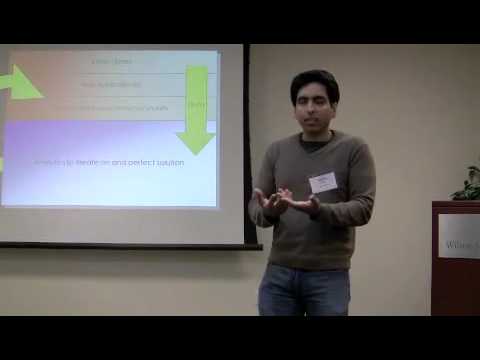 “60 Minutes” ran a fluff piece last night about the Khan Academy. It is a perfect example of the type of uncritical coverage he gets from major media. The only criticisms were reiterated by Khan himself, which he merely dismissed out of hand.

Khan took offense to the idea that he wants to replace teachers with computer programs. Instead, he says he wants to see students learning content at home on the Khan Academy website, then have students come into school the next day to work on Khan’s problems. The teacher will be there to be a coach or a facilitator.

The biggest problem with this is that it is, in fact, a recipe to replace teachers. He is calling for taking the presentation of content out of the hands of teachers and into his own hands. He is also calling for taking the structuring of assessment activities out of teachers’ hands and into his own. This brings up major questions about knowledge: how children encounter knowledge and what knowledge shall be required.

In history, what if a teacher wants their students to approach an historical topic in a critical way? What if they want their students to examine the many viewpoints of people living during an historical era, as well as different viewpoints of historians about that era? In Khan’s “flipped classroom” model, students would encounter the content first through one of his videos. Only afterwards might there be opportunity for the classroom teacher to get students to study critically the topics already taught by the Khan Academy.

This is all wrong. Any teacher knows that the first impression a student gets about a topic is the one that sticks the most. It is one of the reasons why so many students enter high school thinking that Christopher Columbus discovered America. What if Khan’s videos approach history from a myopic viewpoint, presented from a very narrow perspective? (which seems to be the case, from the history videos I have seen.) The teacher now has to compensate for this and get their students to rethink the information on the video. It makes the teacher’s job that more difficult. I am sure the same thing applies to one degree or another for math, science, literature and every other subject.

The same thing applies to assessment exercises. Assessments solidify knowledge in students’ minds. His flipped classroom model calls for teachers to guide students through exercises of his design and project-based activities of his suggesting. The teacher becomes nothing more than an implementer, someone following a script. It really does not matter what the teacher wants, or knows from years of experience what is best for the development of critical thinking.

The people featured in this video seem to paint teaching in brick and mortar classrooms as nothing more than lecturing and reading from a textbook. I certainly do not use a textbook, nor do I lecture, so I take offense to the broad brush with which they paint all teachers. In the presentation of their content, teachers adjust to their classes. Even if the teacher is nothing more than a lecturer (which is very rare), that lecture is given by someone who knows their population, knows the needs of their students and knows how to adjust their words, actions and activities to the students that sit before them.

I teach English Language Learners every year, as well as students with learning disabilities. There is no way I can present material in the same way to these students as I do to mainstream students. Even within these categories, there are students with differing levels of motivation and skills. By the middle of the school year, I find that my teaching style, my demeanor, my notes, the material, the questions I ask differ from class to class. There is an unconscious adjustment that takes place in the style of an experienced teacher where they sense just how to tweak things in order to have the greatest possible impact.

Khan offers nothing of the sort. As I have stated before, he offers nothing but a pause button. All a student can do with a Khan video is watch the same content delivered in the same way over and over again. A very thoughtful analysis of Khan’s videos by Mr. Foteah concludes that Khan uses words that are way out of the league of many English Language Learners, not to mention of mainstream students. Khan, the Ivy League graduate, uses a certain manner of speaking that is alien to inner city youth and immigrant students. No amount of pausing and rewinding will overcome this. Khan cannot make the types of mid-lesson and mid-semester adjustments that a veteran teacher can make.

There is no doubt that Khan’s videos have helped many students. Videos have helped me understand certain topics better, usually Youtube lectures by college professors or policy wonks. But I am a motivated student, I have some background in the topics I want to learn about and I have a sense of the areas in which I need help. Khan’s videos do little for the unmotivated student, the one that teachers encounter on a daily basis. The bells and whistles that Khan adds to his lectures, like the drawing program and the gamey assessment activities, will do nothing for the student who has to walk through gang territory every day or who comes from a home where they are malnourished.

Khan is not an educator, nor are the people on his team. Perhaps the most insulting thing about the 60 Minutes piece, as well as the people who tend to totally embrace Khan, is how dismissive they are of what teachers do on a daily basis. Sanjay Gupta, the person who did the 60 minutes story, is a medical doctor. He keeps contrasting Khan to a school room of lectures and textbooks, a school room that is largely non-existent after decades of education reform and flavors of the month. It is scary to think that people with so little awareness of what actually takes place in schools think they have found the next great educational paradigm shift. They do not even know the existing paradigm.

One of Khan’s supporters on the video even said that change does not usually come from the institutions that run public schools. Perhaps they have not been paying attention to what has been happening in New York, D.C. and Chicago over the past ten years. There has been nothing but change, usually brought about by people who are not educators themselves. This change has taken place with the cooperation of the unions, including our own beloved UFT here in NYC. To say that the system does not embrace change does not even pass the giggle test.

Khan is part and parcel of this wider movement we call education reform. They work from this Shock Doctrine-esque idea that schools are in a “crisis” or are “failing”, so they must undergo major changes. It was not at all clear that schools were in any crisis at all before the reformers took the reins of the school system. The things they have used to justify this “crisis”, namely test scores, have not improved since the reforms have been implemented. The “crisis” in education is a perception built by a constant barrage of news stories about school shootings, teacher misconduct and peeling paint on the walls. These things have not, nor have ever been, presented in proper proportion to the system as a whole. Even if schools are in a crisis, does this mean that schools themselves need a paradigm shift? What has always been overlooked, indeed never touched, is the impact of poverty, family dysfunction and street crime on the school system. These are structural problems with society, not failures of school systems. The more we blame schools for these issues, and the more we think “changing” schools will solve these issues, the more we remove ourselves from any structural solutions to poverty, inequality and broken communities. Education reform in general is one large mass distraction from the broken socioeconomic system under which we all live.

Bill Gates is Khan’s biggest supporter. He says his children use Khan’s videos, yet they do not attend flipped classrooms. Just like every other reformer, they send their own children to elite private schools with small class sizes, veteran teachers and traditional methods. Just like every other reformer, this type of education is somehow not appropriate for everyone else’s children. What Khan’s movement represents is the deskilling of the teaching profession, something the reformers have been aiming at for decades.

The last line of defense for the Khan supporter, as well as the supporter for of many other ed reforms, is that the Khan Academy is just “one more tool” in the teacher’s arsenal. This gets tiring after a while. Teach for America was just one tool to overcome a teacher shortage, now they are pushing out veteran teachers in an age when no shortage exists. Fuzzy Math was one more tool, yet it was foisted on school districts nationwide as the standard curriculum. Young adult literature was one more tool to get students interested in reading, now it is one of the fastest growing literary (I hate using that word) industries around. Now Khan is one more tool. It cannot represent one more tool as well as a paradigm shift in education.

There are so many tools around that teachers do not know which one to use next. Most of these tools are things educators have never asked for, never sought out and never had input into creating. Teachers have been asking for smaller class sizes for years, yet it has never come to pass. We have been calling for the amelioration of childhood poverty for years, yet it continues to get worse. We have called to retain our job protections so that we can speak up for our students, yet they continue to be eroded away. Why not give teachers the tools they have been asking for over the past decades, instead of foisting tools from an ivory tower that were never asked for?

It is because these things were never meant to be tools. They all seek to undermine teaching as a craft, to get as big a slice as the education pie as possible and to hand off the public institution of education off to private corporations.

If you are for the corporatizing of public education, then say so. It never happens like that. Just like Salman Khan, they will sit there with a big grin and act like they have a genuine concern for other peoples’ children. It is the grin of the con artist.