A Tale of Two School Districts 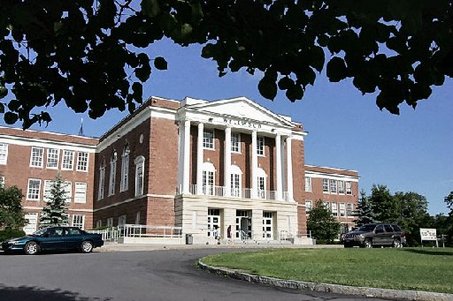 What do you know? A school that does not look like a jail.

To teachers in New York City, schools in the “suburbs” are mythical places. They have parking lots, swimming pools, computer labs, debate teams and lacrosse. Class sizes are small, educational resources abound and students sit still with hands folded and have names like “Cody” and “Brianna”. Teacher salaries are higher while less is generally asked of them. The only negatives we hear are about the parents who, as the polar opposite of many of those in NYC, are overly engaged in their children’s education and ready to challenge a teacher as to why their kid received a 95 and not a 97.

Urban myths? I guess it depends on the suburb.

I have a friend who is about to finish his first year as a high school teacher in an upper class school district. Before this gig, he taught in NYC for several years. In his own words, the transition from urban to suburban has been a “culture shock”.

He is treated like a professional. Administrators do not yell at him, subject him to useless professional development, lecture him in staff meetings like a child or berate him because he did not hand in or sign off on some meaningless paperwork. They respect his time as a teacher and understand that he has lessons to write, assignments to grade and students to tutor.

Perhaps this is because there are so few administrators at the school: three for a student body of about 1,300 kids. They handle the day-to-day operations of the campus while teachers lead academic departments. The only time the principal asked the teachers to do anything outside of teach is when she tried to mobilize the staff to resist the new value-added teacher evaluations.

My friend still has a tough time believing that a school like this can exist. He still fears that, whenever he sees the principal, he is going to be yelled at or harassed. He fears that one day the principal is going to take off her mask and reveal herself to be a reptilian overlord out to make his life a living hell. I think he can sue the NYC DOE and his former principal for an acute case of Post-Traumatic Stress Disorder.

Since his time there, no teacher has been sent to a rubber room or reassigned. In fact, he has never even heard of any teacher being investigated for anything at the school. The staff is filled with veterans who have been there for several years, if not decades. Teachers hug their students, entertain them in their classrooms during lunch and routinely give them pats on the back and reassuring rubs on the shoulder.

And there is no small-minded administrator or ghoulish newspaper reporter there to cry “pervert”.

If I did not know any better, it seems as if my friend teaches in a healthy environment. Teachers do not come to work fearing what their principal will put them through today, nor do they have to put up with an autocratic mayor who sees himself as God Almighty. They can come to work and focus on teaching which, hard as it is for us in the city to believe, is the real job of the teacher.

You think the students at the school benefit from having a veteran teaching staff whose professionalism is respected? Gee, I don’t know, that is a tough one.

And what about us poor schlubs in the city? We may not be able to have the swimming pools or lacrosse teams that they have in the suburbs, but why is it that we are not entitled to the same healthy work environment my friend has? Why are we constantly broken down by administrators with questionable teaching backgrounds and ethics? Why do we have to open up the newspaper every day to find another round of bash the teacher?

You think the students at our schools lose out by having a teaching staff who are treated like criminals? Gee, that is a tough one as well.

So, why the contrast between my friend’s suburban school and New York City?

Because the parents in my friend’s upper class school district would never stand for it. They send their children to school to learn, to earn good grades and to build a transcript that will get them into a good college. They do not expect teachers to be babysitters, nannies or counselors. They expect teachers to teach. They cannot do that if they are in constant turmoil. A school that rubber rooms its teachers, wastes their staff’s time with useless meetings and PD and generally harasses them as a matter of policy would bring up serious questions about the leadership of that school. Angry parents will show up to school board meetings, point out the fact that their property taxes are funding their children’s school and call for the administration’s head on a platter.

On the other hand, parents in NYC are largely absent. Not only are they unaware about what their children do at school on a daily basis, but they expect teachers to raise their children for them. This creates a vacuum, one that administrators are all too happy to fill. It starts with people like the Mayor and Governor who claim to be “lobbyists” for children. Of course, this implies that parents are incapable of playing that role. And in the name of “the children”, they foist all types of “reforms” on the system that have nothing to do with learning and everything to do with building a billion-dollar edu-industry of testing and data. In order to implement these reforms, they seek out the most pliant and unimaginative people to be administrators.

That is why when an administrator says they intend to do something for the sake or safety of “the children”, you better run the other way. This means a teacher is going to get harassed. It is just like Napoleon who made all of his reforms in the name of “the people” of France.

Imagine Mayor Bloomberg going out to the Hamptons to run a school system and telling the parents he knows how to educate their children. Imagine him closing down their schools, harassing their teachers and hiring yes-men (and women) as administrators. He would be run out of town as a laughing stock.

But this is par for the course in NYC, as well as urban school districts across the country. That is why in battling education reform, teachers who actually care about what is happening need to activate the parent community. They need to get parents to take the type of stock in their children’s educations as parents in the suburbs.

There is a long road ahead in this regard, but it is a fight that we cannot give up. The alternative is an eternity of harassment and misery.

9 responses to “A Tale of Two School Districts”