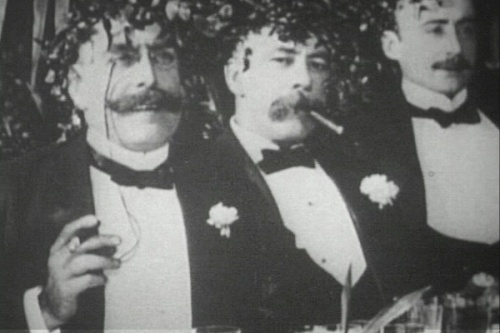 A recent article in Salon neatly describes how the current era of U.S. history mirrors the Robber Baron era of the late 1800s-early 1900s, also known as the Gilded Age. The familiar bugaboos for progressives are there: wealth inequality, political corruption and corporations run amok.

There is another similarity I see between the two time periods, which is the increasing tendency today to ascribe one’s station in life to inborn characteristics. During the Gilded Age, this tendency manifested itself in Social Darwinism and, more ominously, Eugenics. Today, we see it in the celebration of the 1994 book The Bell Curve: Intelligence and Class Structure in American Life, co-authored by Charles Murray. Turgidly. the point of the book is to prove how innate intelligence largely accounts for one’s socioeconomic class.

In the well-worn debate between nature and nurture, it seems nature wins out in static and conservative eras. It is a convenient way to justify gross inequality.

During the Gilded Age, Social Darwinism and even Eugenics were fundamental beliefs. Both conservatives and progressives subscribed to these ideas in some form or another. Even Woodrow Wilson, the Progressive’s progressive, believed in Eugenics. Then, by the end of World War II, Eugenics fell into disrepute because of its association with Hitler. The Great Depression damaged the entire nature side of the nature/nurture debate. It was proof positive that destiny was shaped by forces well beyond one’s natural gifts, like volatile business cycles. Post-war conservatives still clung to some form of “nature”, but it was persona non grata in liberal intellectual circles, and liberal intellectuals would be in the saddle for most of that era.

Today, it is not only conservatives like Murray who are reviving Eugenics. Liberal education reformers, like the one who wrote this essay, seem to be hung up on it as well. The article’s title asks the question, Can Schools Spur Social Mobility?

Before he answers that question, however, he delves into the world of Charles Murray. He explains that Murray answers that question in the negative. It is negative because we have already done a bang-up job of moving all of the cream of society to the top. There is simply nothing left for schools to do to increase mobility. Society is as mobile as it is going to get.

For the author, this creates a crisis of sorts. Agreeing with Murray “gives cover to educators who look at a classroom of low-income children and diminish their expectations—thinking that ‘these kids’ aren’t capable of much, educators who don’t buy the mantra that ‘all children can learn'”. It is tough to image which educators the author, Michael Petrilli, has in mind. Why would educators even choose the profession if they believe kids cannot learn? In Petrilli’s mind, it must be because of those fat paychecks and summer vacations.

Yet, in the very next breath, Petrilli pretty much concedes Murray’s point by asking “would we be shocked to find that the average intelligence level of such a classroom is lower than a classroom in an elite, affluent suburb?” But then he backtracks by stating:

“Yes, intelligence is malleable, not innate. Yes, an exceptional school/teacher/curriculum may boost that average intelligence level. But can those factors boost it enough to overcome the disparities Murray describes? If not, what can educators do?”

He then dedicates the rest of his essay to describe what educators can do. This means his recommendations aim not at boosting intelligence per se, but at boosting them within the very limited range of improvement allowed by Murray. So, he believes poor minority children can get smarter with a better education system, but not much smarter. For him, more gifted classes and online learning can help. Why he thinks these things can help he never really explains.

For Petrilli, sky is not the limit. It seems to be about 90% genetic and 10% education system, especially the teacher.

What is absent from the ideas of both Murray and Petrilli is socioeconomic circumstance. Petrilli cites Murray by explaining elite universities overwhelmingly serve the children of the intellectual elite because their parents were of the intellectual elite. They both assume that the students at these schools are in fact the best and brightest the country has to offer. This means that George W. Bush, who went to Yale, got there on his merits and not because of his family legacy.

There is something to be said for the idea of moving students from the projects into professions like plumbing. Rather than call for more online classes, what Petrilli should be calling for is vocational education. Unlike endless batteries of standardized exams, vocational learning might actually bear some fruit in the future. Unfortunately, so-called progressive reformers like Petrilli, the prescription is the same no matter what you want the outcome to be: more education reform. There is no room for vocational education in that program. Online learning, testing and charters are where the money is at for deformers.

Both Murray and Petrilli are out of touch. While Petrilli starts off the essay as if he is going to disagree with Charles Murray, he essentially concedes Murray’s salient points. Yes, kids already in elite schools are smarter, as are by and large the social classes those kids represent. Petrilli disagrees with Murray only peripherally. For Murray, nothing can be done to make America more equal. For Petrilli, we must expend a lot of effort to get the few gems from the poorer classes into Harvard. The vast majority are destined for the life of working for a living.

This is the type of stale discourse we would have found in the Gilded Age. While one guy is supposedly conservative and the other guy is supposedly progressive, their ideas demonstrate a consensus in elite circles. They both believe that richer people are just plain smarter. This also helps explain the unquestioning, thoughtless and mechanical manner in which Common Core, online learning and charters have been foisted upon us. Since these are reforms conjured up by the rich and brilliant, then of course us stupid teachers and hopeless inner city students should accept it.

3 responses to “The New Gilded Age”