Where Does New Jersey Stand? 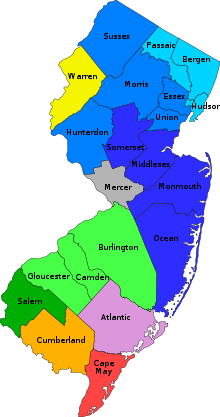 Besides bad drivers, bad air, too many highways, a bad governor and coastal flooding, what is there not to like about New Jersey?

Earlier this year, teachers in New York City were bracing themselves for two things that happened pretty much simultaneously. The first was the creation of a new evaluation system that uses a 20% value added metric on state exams. The second was the publication of how particular teachers’ students did on statewide exams. By most people’s judgments, we had lost on both counts. Our unions, both NYSUT and the UFT, seemed unwilling or unable to put up much of a fight. The reformers had their way with us and our students. We are already being introduced to the Danielson rubric and many of us have an idea of the type of statewide exam on which we are going to be judged. But other parts of the evaluation agreement have yet to be worked out.

And therein might be a glimmer of hope. By the time the negotiations and court cases over these particulars are resolved, our country and state might be headed in a different educational direction. The events of earlier this year were an outgrowth of a major effort by education reformers that had been gathering steam for over a decade. Their momentum crashed right over New York’s schools and changed our landscape for the worst. However, there might be reason to believe that the NY evaluation fiasco was the high tide of reform never to be replicated again here or elsewhere. To be sure, there were other major reformer victories, most notably the implosion of Philadelphia’s public school district. Yet, while the reformers were notching these victories, there were also signs that their influence was on the wane. The times seemed to be a-changin’ in that Spring and Summer of 2012, if only very incrementally.

Chicago Mayor Rahm Emanuel canceled the final 4% salary increase in the CTU’s contract, added to the school day without compensating teachers and promised to ratchet up the invasion of charters and testing. For his overreach, Emanuel now has a teacher strike on his hands. The results of this strike will go a long way in determining if the times are a-changin’ or not.

And, very quietly, a strange tenure reform law was passed in New Jersey. It did not get much national press, nobody spoke about it in detail (not even Chris Christie himself at the Republican National Convention) but it was a curious little law in a curious little state.

Christie become New Jersey’s governor right when the Tea Party “movement” was getting into full swing. He swept into office on a high tide of feelings of goodwill for conservative candidates nationwide. In a very short time, Christie has earned the reputation as one of the Republican party’s shining stars. He was even on the shortlist to be Mitt Romney’s running mate.

Part of his success has come from declaring war on many of the familiar bugaboos of the Republican Party, including public sector labor unions. It was clear from the day he assumed office that he was in the educational reformer camp, a group that includes many conservatives and so-called liberals.

Teachers particularly seemed to stick in his craw. He had disparaged teachers and their unions on many occasions, called for the total elimination of tenure and vowed to support charters and vouchers as an alternative to a school system he predictably labeled as “failing”. His sights, much like the sights of other governors like Scott Walker, Bobby Jindal and Andrew Cuomo, seemed to be squarely set on public school teachers. If a leader like Chris Christie, someone who was as popular and powerful as any governor in the union, wanted to drastically reform teaching in New Jersey, there would be very little hope anyone can stop him.

The only group that had the power to stand in his way was the New Jersey Education Association, New Jersey’s statewide teacher union. If Christie wanted to reform teaching in the state, he would have to reckon with them. Christie floated the familiar education reform schemes: merit pay, elimination of due process and, most drastically, an end to collective bargaining. Would the NJEA roll over and die on these issues like so many other teacher unions? One thing they had going for them was the fact that many NJ school districts are rated top notch nationwide. There seemed to be very little “dead wood” on the teaching staffs in NJ and, when they were found, they mysteriously were concentrated in places like Newark and Camden. I wonder why?

After two years of attacking teachers and their unions, and after many months of contentious negotiations where Christie’s camp was bolstered by the likes of DFER, the deal that he struck with the NJEA was the following:

1) Teachers needed 4 years of effective ratings to get tenure

2) Teachers who already have tenure can face termination proceedings if given two ineffective ratings in a row.

Furthermore, the termination proceedings in NJ were supposedly streamlined so that hearings are less expensive and faster. In NYC, this has meant the hiring of a new crop of arbitrators who seem hell-bent on firing everyone. What this means for NJ only time will tell. The NJEA was also able to preserve “last in, first out” in the case of teacher layoffs.

There was something about this law that seemed different from many of the other tenure reform laws passed around the country. In short, it did not seem like a wholesale victory for the reformers. In fact, it did not seem as if Chris Christie got anything he wanted out of this deal at all. Where was the merit pay? The destruction of tenure? The elimination of collective bargaining? Chris Christie got nothing out of this deal.

Maybe this is why he did not race to sign the bill into law. After all, Romney was still choosing his running mate at this time and Christie was a serious contender. He did not want to be associated with such a union-friendly bill at such an important time in his political career. Magically, after Romney chose Paul Ryan, Christie signed the bill into law at a big ceremony with NJEA and DFER officials. They all hugged and shook hands and made speeches about the spirit of collaboration.

But teachers in New Jersey were asking about what had just happened. They saw what transpired right over the border in Philadelphia and New York. Despite all of that, could this be? Was this actually a victory for the teachers’ union? Cami Anderson, the reformers’ darling superintendent of Newark’s schools, gave us a clue when her reaction to the law was something along the lines of “what, we still have last in, first out?” She was not applauding it, making it a strange education law indeed.

To be sure, this was just one fight of many to come. There promises to be efforts to tie teacher evaluations to standardized exams, to institute merit pay and to dot the Garden State with charters. The NJEA will have to keep fighting, and they will hopefully do just that.

Maybe New Jersey, with its popular reformer governor and decidedly un-reformer tenure law, was the hinge. Maybe on the heels of the NY nightmare and the Philadelphia implosion, New Jersey was the rock on the shore that did not get washed away. Perhaps, just perhaps, that was the sign that the reformers were losing steam. A little more than a month after this law was signed, Chicago’s teachers went out on strike.

Maybe the NJEA and the brave Chicago teachers are pointing the way for those of us in New York. The UFT has yet to work out a deal with the city regarding the student assessment portion of the new evaluations. There also has yet to be a test case in the courts over using standardized exams and value added metrics to rate teachers. When these things do happen, maybe the environment will be more conducive to teachers and more respectful of our profession. It is up to us and our union leadership to hold their ground and act on the examples put forth by the NJEA and the CTU.

It is time to push back. All the union activists, opt-out leaders, public education advocates, anyone with a desire to save the institution of public schooling, maybe now is the time for us to go on the offensive, or at least play a stronger defense.

And maybe one day we can look back on it and say it started with a little law in the state of New Jersey.

5 responses to “Where Does New Jersey Stand?”