The New CTU Contract vs. The Old UFT Non-Contract 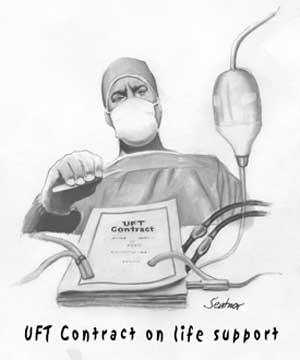 Norm at Ed Notes has a thorough treatment of what might be in the new Chicago Teachers’ Union contract. Michael Fiorillo expresses gratitude to the CTU:

Can’t we at least take satisfaction and feel some gratitude in the CTU wiping some of the smugness and arrogance off the faces of these bastards, and showing that the destruction of the public schools will not be passively allowed to happen?

This was an epochal strike, one that will be seen as the opening round in the battle to reclaim public education. After decades of being slandered and knocked back on our heels, the CTU has shown that we can fight back and begin to reclaim the territory that is rightfully ours. They deserve our thanks and support.

Those of us in NYC especially need to thank the CTU. As Michael suggested, they have shown us that fighting back against the education reform juggernaut is possible. We have had the reformer boot on our necks for a decade here in the nation’s largest public school system. The Chicago strike was a gunshot in the darkness, a potential awakening to the fact that the boot is on our necks only because we have allowed it.

And “we” means our union. As was pointed out in Norm’s post, there will surely be spin by UFT leadership as to why the strike was unnecessary, about how we have all of the things the CTU has without striking and how our salvation lies in backroom negotiations with reformer types.

So, let us put that to the test by comparing what the CTU might have gotten to what we have. Bullet points about the CTU contract all come from Norm’s link included at the start of this post.

1. They have a contract.

The first response to any Unity supporter who tries to downplay the Chicago strike is that they have a contract and we do not. They were willing to strike for their right to a contract, while the UFT has done…. what exactly?

2. *Provide A Better School Day:* The Board will hire 512 additional ‘special’ teachers in art, music, physical education, world languages and other classes to ensure students receive a better school day, a demand thousands of parents have called for since last year.

While in NYC, each school has either one art or one music teacher, but not both. Foreign languages are dying and hundreds of Spanish, French, Italian, Chinese and Latin teachers around the city have been excessed over the past 3-5 years. The state is working on  getting rid of the Global History regents, which will surely mean teachers of that subject will face layoffs and excessing in the near future.

3. *Ensures Job Security:*Creates a “CPS Hiring Pool,” which demands that one-half of all of CPS hires must be displaced (laid-off) members.

A good provision that not only protects jobs, but ensures children will have more experienced teachers rather than TFA mercenaries. Meanwhile, in NYC, we have an untold number of ATRs, perfectly good teachers who are demeaned every day by making copies, locking bathrooms and doing cafeteria duty. That is not to say these jobs are demeaning, that is to say that our ATRs should be teaching. Of course, the Unity response to this is “at least they still have jobs”. Protecting jobs is the least a union can do for its members. It makes no sense to give the UFT credit for doing the least with our union dues. They should be fighting for our conditions, quality and professionalism. The CTU restored some of that with this provision.

4. *Adds An Anti-Bullying Provision: *No more bullying by principals and managerial personnel. The new language will curtail some of the abusive practices that have run rampant in many neighborhood schools.

This is one of the biggest problems in NYC, a problem that has been allowed to persist because of a lack of a new contract. The contract by which we are forced to abide has so much grey area, grey area that has allowed principals to get away with murder, that the bullying of teachers is epidemic throughout the system. The fact that we cannot grieve letters to the file anymore, the fact that it is nearly impossible to win the grievances we do bring forward, the fact that teachers pretty much have to sue in court to overturn “U” ratings because of the biased appeals process, the fact that Walcott has supported principals who sexually harass their staff, the fact that SCI and OSI essentially now try to substantiate every frivolous charge and the fact that the new generation of arbitrators hired for 3020a hearings were brought in to fire teachers has led to a system that bullies teachers as a matter of policy. We do not know exactly what kind of anti-bullying provisions were won by the CTU, but we do know that we have no anti-bullying provisions in NYC. When we finally do negotiate a new contract, something substantial has to be done about bullying or nothing else we get in the contract will matter.

5. *Racial Diversity:*The CTU continues to fight the District on its lay-off policies that has led to a record number of African American educators being laid off and eventually terminated by the District. The new contract will ensure that CPS recruits a racially diverse teaching force.

A high percentage of laid-off Chicago teachers have been black. This is an Arne Duncan legacy and has continued in Chicago until this day. To replace them, we get the Ivy League suburban TFA alum with no ability to communicate with inner-city students and no intention to continue to teach. That means they are not motivated to learn how to communicate with inner-city students, making them mostly crappy teachers. The same thing is happening in NYC. The black educator has been disappearing. This is not so much a race issue as it is an issue of community-building. Too many new teachers are from the suburbs and have no idea what the students in their classes face. There is an alienation between student and teacher. The CTU is trying to overcome this. The UFT, historically, has driven wedges between teachers and the communities they serve. The 1968 strike comes to mind. It is unlikely the UFT will change their tune in this regard or call for hiring practices that will bring in people from the community. It is a shortcoming woven into the fabric of the Unity caucus.

6. *Fairer Evaluation Procedures:* The new contract will limit CPS to 70% “teacher practice,” 30% “student growth” (or test scores)—which is the minimum by state law. It also secures in the first year of implementation of the new evaluation procedures there will be “no harmful consequences” for tenured teachers. It also secures a new right—the right to appeal a Neutral rating.

Teacher evaluations based 30% on student test scores is the most the CTU could have gotten thanks to Illinois law. In New York, we have at least 20% and most likely it will go up to 40%. It is the only 40% that matters since we are rated “inefficient” overall if we fail that 40%. This is what our union negotiated for us and told us it was such a great thing. Not only did they not resist any parts of these provisions, but defended them to us. The fact that two inefficient ratings in a row leads to 3020s hearings effectively ends tenure for NY teachers. In Chicago, they have at least secured some sort of guarantee for tenured teachers., as well as a right to appeal that seems more fair than in NY. Remember, in NYC, only 13% of teachers will have the right to appeal a bad rating. The UFT tells us this is preferable to what goes on now where no teachers ever gets a “U’ overturned. Unfortunately, it was the UFT who allowed it to get that way in the first place.

7. *Reimbursement for School Supplies:*The contract will require the District to reimburse educators for the purchase of school supplies up to $250.

Hmmmm, I am no mathematician, but $250 seems more than the NOTHING NYC teachers get now.

Paperwork sorely cuts into teacher time. We know that the vast majority of paperwork we get is useless. While this is a problem in all schools, the fact that the CTU tackled this issue at all is a small victory for our professionalism and respect for our important duties. By the way NYC teachers, have you filled out your Circular 6 assignments yet?

Notice that most of the things in the new CTU contract have to do with learning and teaching conditions. This should put to rest all of the dumb talk about going on strike for “more money” and “limousine benefits”. Much of what is listed above goes to the heart of what it means to be a teacher in the age of education reform,

As for our union in NYC, they cannot pretend that the contract we currently do not have is better than what the CTU received after a strike. While this is not a perfect contact (none of them are), its provisions certainly beat most of the contract we are forced to work under. Is the corporate unionism of the UFT better for students and teachers than the social justice unionism of the CTU? Look at the contracts and decide for yourself.

4 responses to “The New CTU Contract vs. The Old UFT Non-Contract”