LEO CASEY RESPONDS TO NYC TEACHER OUTCRY…. AND I CRY SOME MORE 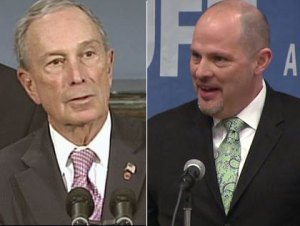 Leo Casey has been good enough to respond to my post about Michael Mulgrew’s comments yesterday, comments that me and many others see as preparing us for a “sellout”. I thank him for taking his time to write out a thoughtful response.

I think his comments are are too important to leave buried in the comments section and have decided instead to give it its own post. I will respond to Leo Casey in this post. If he wishes to further respond to what I say it is up to him, although he is obviously under no obligation to do so.

Perhaps, but understand that me and every other NYC teacher is getting their information from Gotham Schools, the NY Post and Michael Mulgrew himself. Out of the hundreds of words to be read between those three sources there was no mention of the term collective bargaining. Every single one of them said the same thing: the governor and the state legislature are willing to push an evaluation regime through legislative channels, thereby instituting one by fiat. Mulgrew said he was fine with that. This comment by Leo Casey is the only time the term collective bargaining has been used to describe what the governor is promising to do.

Therefore, if there is a misunderstanding it is due to the nature of our sources, sources that include the UFT President himself.

Now on to the rest of Leo’s comments.

It is not uncommon to have negotiations grind to a standstill, especially when one of the parties — in our case, Michael Bloomberg — has no intention of engaging in good faith negotiations. Bloomberg can not get over the fact that law requires the DOE and City to negotiate teacher evaluations with the UFT, rather than be able to unilaterally impose what he wants — a system focused on the notches he can put on his belt for the number of fired teachers. What the Governor and leaders of the state legislature are saying is that if impasse with the city continues because of the mayor’s obstructionism, NYSED would act as an arbitrator, and issues that could not be resolved in negotiations would go to it for a decision.

This is a standard procedure in both labor law and collective bargaining practice, commonly described as a form of binding arbitration. Binding arbitration is not rare: it is in that forum that management and labor bring issues of the interpretation or implementation of a collective bargaining agreement that they can not resolve between them. The recent decision on SESIS (http://www.uft.org/news/uft-prevails-sesis-arbitration) is an example of binding arbitration, in which an arbitrator ruled that the DOE would have to compensate teachers for the additional time they spend, beyond the regular work day, to do the paperwork associated with the system.

It is important to remember here that there was an agreement that was reached between the UFT and the DOE that the mayor then blew up. The number of issues where there is now disagreement are finite and small. Chief among these is the issue of the sunset clause, where the mayor withdrew the agreement to have such a clause at the very last hour. In the days since he blew up the agreement, the mayor has made the sunset clause into a line in the sand, accusing hundreds of other school districts and the NYSED of countenancing ‘sham’ evaluation systems because they had sunset clauses. At the same time, Bloomberg’s account of the sunset clause and of the events that led to him blowing up the agreement over that clause have been publicly refuted and discredited by the President of the CSA, NYS Commissioner of Education John King and Governor Cuomo himself. New York City teachers have nothing to fear from putting that issue to NYSED for a decision, should the mayor continue in his fits of pique.

Real political debate requires a honest airing of disagreements. The suggestion that Michael Mulgrew gas given away “collective bargaining rights” or that I sold a “bill of goods” in talking about the role of collective bargaining in determining teacher evaluations are misrepresentations, and do not advance the honest debate that members of the UFT deserve.

This is a very curious response. Essentially, Leo Casey is saying that whatever Cuomo is threatening to push through the legislature is a form of binding arbitration. He compares what Cuomo is threatening to do the recent SESIS decision where an independent arbitrator ruled in favor of the UFT. I find this to be a disingenuous comparison.

Cuomo and the state legislature are going to be pressured to do what is popular. What is popular may run counter in many cases to what the union wants, especially when it comes to accountability.

Remember that Students First and Educators 4 Excellence have spent the past year pushing for a law that would force an evaluation system on districts that have failed to agree to one. This is exactly the type of law Cuomo is proposing. The proof is in the pudding according to the Post:

A few hours before Cuomo made his announcement, the Bloomberg-backed “Students First” advocacy group filed a short-lived lawsuit to try to recoup the lost state aid, sources said.

But the lawsuit was quickly yanked after Cuomo called Bloomberg, sources said.

Right and they yanked the lawsuit because Cuomo is offering what they have been lobbying for for the past year on a silver platter.

Does the union feel any compunction about being in such close agreement with the likes of Micah Lasher?

To say that a state law is the same as an independent arbitrator’s decision is ridiculous. Nothing in any article about the matter has mentioned the terms collective bargaining or binding arbitration.

This is my take on Leo Casey’s response. To me, it seems as if he is doing a great deal of damage control. He is making it seem as if the union is not backtracking when they clearly are doing just that. We were promised collective bargaining. Mulgrew and Unity negotiated in good faith. No agreement was reached. That is what our collective bargaining came to.

Rather than defend the principal of collective bargaining at the local level, the thing that Casey said was essential to the process last year, they have allowed the whole bowl of fruits and nuts to be decided by government fiat. Government fiat is not a form of binding arbitration. It is a form of coercion.

And it is a form of coercion by a governor who is under pressure from billionaire groups like Students First. This makes the governor anything but independent and makes any system he comes up with tainted. More importantly, it is against the spirit and principles of what our union promised us last year.

I appreciate Leo Casey’s response. As I have said before, I like him as a human being. But I see no reason to see whatever Cuomo comes up with as a form of binding arbitration.

Has Leo Casey changed your mind? What do you think?

7 responses to “LEO CASEY RESPONDS TO NYC TEACHER OUTCRY…. AND I CRY SOME MORE”