STUPID QUESTIONS ON THE JANUARY 2013 GLOBAL HISTORY REGENTS (PART I) 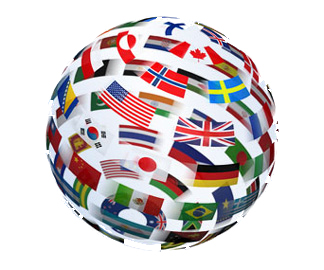 The history of all humankind in 50 questions. What could possibly go wrong?

It’s time for another round of stupid questions from the brain trust that is the New York State Board of Regents. Last time, we examined multiple choice questions from the most recent U.S. History Regents. This time we will do the same for the Global History Regents. The only difference is that the sheer volume of stupid questions on this exam defies logic so, out of mercy for the reader, the dissection of these questions will have to be divided into two or three smaller postings.

The Global History Regents is one of the killer exams that all NY State public school students have to pass in order to graduate. It almost always has much lower pass rates than the U.S. History exam. This is probably due to many factors: the fact that it tests a two-year curriculum, unlike the one-year curriculum of U.S. History; the fact that it hopscotches time periods and continents with the abandon of a drunken time traveler; and the fact that more students overall tend to take the exam in the first place.

The State of New York has been giving these Regents Exams for the better part of a century. One would think they would have gotten it right by now. Unfortunately, as we will see below, this is not the case.

They really waste little time in getting to the stupid questions, as the second one is pretty sub-par:

Which body of water is located between Southwest Asia and Southeast Asia?

The answer they want is (3). Why they want answer (3) is sort of a mystery. Here is a map of the Indian Ocean. Maybe you can see what the problem is with saying the Indian Ocean is between Southwest and Southeast Asia: 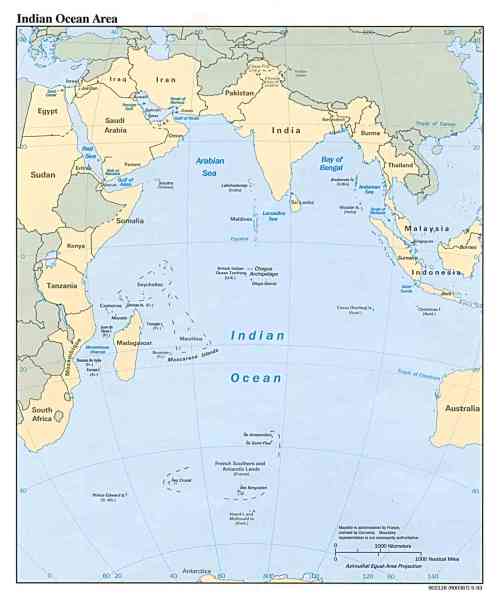 As you can see, the Indian Ocean borders no other continent outside of Asia.

Let’s take Saudi Arabia on the left side of the map as Southwest Asia and Indonesia on the right side of the map as Southeast Asia. The Indian Ocean might be described as being in between these two points. But describing it in this way leaves out that very westward sliver of the Indian Ocean, the sliver that borders Africa. Why the Regents decided to circumscribe the Indian Ocean between two opposite points of Asia is a little bizarre. They could have easily asked what body of water is between Africa and Southeast Asia and been a sliver more accurate.

The other problem with this question has to do with what one means by “Asia”. Asia has always been a problematic term. Taking a long view of the map, Europe is merely a peninsula of the Asian land mass. The border between Asia and Europe is a cultural one more than a geographic one. Just ask historians specializing in Russia who still debate the question of exactly what continent the country is on. Just ask Turkey who has been lobbying hard to be part of the European Union. Part of the reason they have yet to be accepted has to do with Europeans’ age-old view of Turks as outsiders, Orientals or, in other words, Asians. In that case, the answer to the question could also be (4), which is the Black Sea.

Is Turkey not Southwest Asia too? Why do they get shunned by both Europeans and the Board of Regents?

It may not be the greatest example of “between”, but neither is the answer for which the Regents is looking.

Speaking of not the best answer, question 7 fits that description to a tee:

Base your answer to question 7 on the photograph below and on your knowledge of social studies. 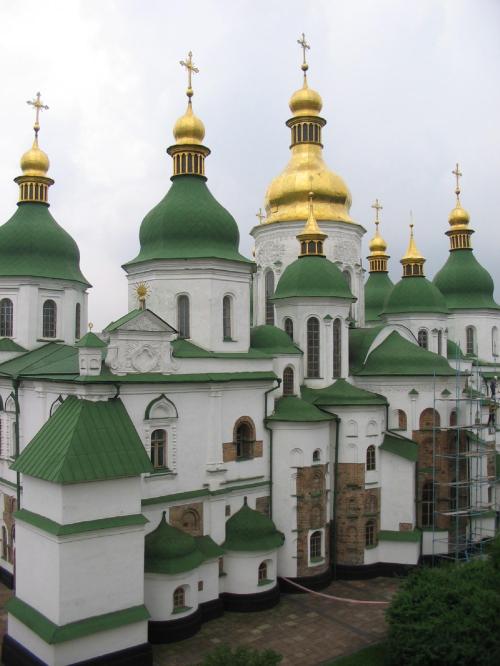 Which civilization most influenced the style of Russian architecture shown in this photograph?

The first thing I thought when I read this question was “Hello, maybe Russia, duh”. But assuming that a civilization cannot influence itself, which might be an interesting historical question in its own right, the answer they want is (2) Byzantine.

This is a common Global Regents question. Every year they are sure to ask about how the Byzantine Empire influenced Russia. Those types of questions are usually straightforward enough, usually relegated to references to the Orthodox Church. But, this year, the Board of Regents took a bold step when asking this question, especially considering what pops up on a Google image search of Umayyad architecture: 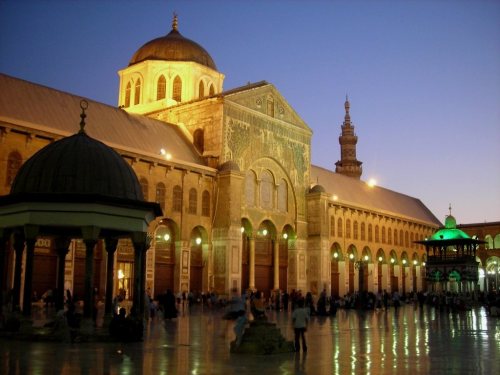 There is absolutely no resemblance between this Umayyad mosque in Damascus and St. Sophia.

To be sure, there are some key differences between this mosque and St. Sophia. The columns and archways adorning this Umayyad mosque speak to a Grecco-Roman influence. The lack thereof in St. Sophia gives it a much more Medieval feel. However, you can’t tell me there is no resemblance between the domes in both of these houses of worship.

In this case, where there is resemblance there is also influence. The Umayyads were among the earliest of the Muslim caliphates. They helped lay the foundation for what would become the Golden Age of Islam. One of the most recognizable features of the Muslim Golden Age is the dome, both an aesthetic and acoustic innovation. Islamic innovations like the dome in the centuries after Muhammad’s death would have a great influence over the Byzantines. During this time period, the Byzantines became increasingly isolated from their Christian brethren in Europe. Their fate would become much more entwined with that of the Muslims. The Muslims were the envy of the world throughout much of the Middle Ages so it was only natural for civilizations like the Byzantines to adopt from them, especially in matters of architecture.

The Board of Regents could have made this question just a wee bit stronger by inserting the word “directly” in between “most” and “influenced”.

But then I suppose that brings us back to the Regents’ vague notion of what the word “between” means. Why does this feel like Bill Clinton’s deposition in the Monica Lewinsky case?

The next stupid question also has to do with the Muslims, and question 10 truly is a bad question:

Which statement accurately describes the actions of Muslims during the Crusades

(1) Most Muslims converted to Christianity.

(3) Muslims defended Jerusalem because it was sacred to them.

(4) Many Muslims visited Europe for the first time to obtain luxury goods.

They want answer (3). The Regents is resting their answer on the premise that the phenomenon known as “the Crusades” was strictly a war between Christians and Muslims over the Holy Land.

However, that very limited notion of the Crusades is continually being challenged by historians. There is an entire school of thought that contends the Crusades were basically a series of clashes between Christians and Muslims that took place over the course of hundreds of years. At stake in these clashes was not merely the Holy Land but control of the Levant, access to the Dardanelles and defense of Eastern Europe. Indeed, in all of these battles, Christians tended to bring a Crusading spirit to the fight. It can be argued that the Battle of Lepanto (1571), which crippled Ottoman control of the Mediterranean and helped inspire Cervantes to pen the classic novel Don Quixote,  was the final chapter of the Crusades. After this point, Europeans began to focus their Crusading efforts on “civilizing” the “savage” Americas.

Therefore, the Crusades can be interpreted well beyond the very limited bounds implied by the Regents. Their interpretation of what the Crusades were is a medieval conflict over the Holy Land. However, with the more expansive view favored by some historians, the answer could also be (2) the Muslims attacked and conquered Constantinople. Conquering Constantinople was a long-time goal of the Ottoman Turks that they finally accomplished in 1453. Indeed, the Byzantine Empire (which is where Constantinople was located) had always played a prominent role in the Crusades. It was the Byzantine Emperor Alexis Comnenus’ letter asking Pope Urban II to help him fight off the Muslims that initiated the call for a Crusade in the first place. How is the conquest of Constantinople by the Ottomans in 1453 not part of the saga known as the Crusades? 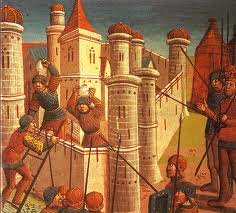 The fall of Constantinople (1453). The Crusading spirit obviously played no role in the conflict.

God forbid a teacher passes along the long view of what the Crusades were to their students. They might bubble in choice (2) and end up failing the exam.

Bear in mind that we are just a 5th of the way through the multiple choice portion of the exam. If they butcher ancient history and geography this badly, I can’t wait to see what they do to more modern subjects.

Yes history teachers, these are the exams by which our students and ourselves will be judged. Are you angry yet?