THE REAL STORY IN THE MATH SLAVERY FIASCO 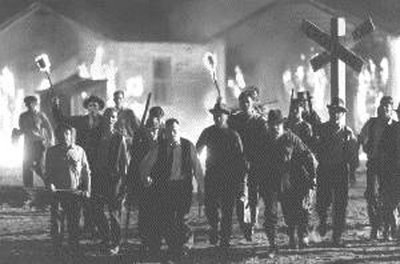 The hypocrite lynch mob is out in force for this one.

The media, DOE and the hypocrite circle are having a field day with the 4th grade math homework sheet that contained inappropriate word problems about slavery.

To summarize, students were encouraged to create their own word problems in an effort to fuse math and social studies instruction. These questions were then combined into a homework sheet that at least one teacher had already used in January. Earlier this month, another 4th grade teacher asked their student-teacher, Aziza Harding, to make copies of the sheet. Harding felt uncomfortable doing this, so she left a note requesting to speak with the teacher instead. She then showed the sheet to one of her professors at NYU, Charlton McIlwain. McIlwain contacted the media and the DOE is considering the appropriate disciplinary procedures.

Rather than jump on the faux-outrage bandwagon, I would like to start a bandwagon of my own.

First, Aziza Harding sets the tone for this faux-outrage:

“Instead of these kids being desensitized to this type of violence, that they have a general idea that, ‘Wow, this was a terrible thing that happened to a group of people for over 300 years,'” Harding said.

Well, by this logic, since the students created these questions does it not mean that they are already “desensitized”? Is “desensitized” really the appropriate word to describe a bunch of 9-year-olds? How much empathy do 4th-graders have to begin with? Perhaps they can empathize with someone who is suffering in front of them. Can they really empathize with the suffering of people who lived 150 years ago?

There are just some instances when you cannot connect two disciplines. Math is best infused with history when it involves some sort of statistical analysis. For 4th-graders, perhaps they can be given the years of significant events in the history of slavery and be asked to add and subtract. “How many years between the Constitutional ban on the slave trade and Nat Turner’s Rebellion?” It does not seem that the math being taught in the ill-conceived slavery worksheet was any more difficult than that anyway.

The entire push behind cross-curricular studies and literacy-infused math is really one of the many hare-brained fads pushed on teachers by education researchers. Some researcher somewhere found that these things “work” with a group of children they used as lab rats, which means that teachers everywhere should use it. Not only should we use it, we must use it NOW because the “future” of children is at stake. We cannot afford to lose one more minute!

Speaking of hare-brained educationists, this brings us to the other untold part of the story. Aziza Harding supposedly left a note with her cooperating teacher. Yet, for some reason, she was just bursting at the seams with outrage that she had to show the worksheet to her NYU professor. And what does the professor, Charlton McIlwain, do? He does not advise her. He does not even call the school. He calls the media. What did he think would happen if he called the media?

Here is what will happen:

The principal said she’ll be meeting with families and all staff members will undergo related training.

The whistleblowing student teacher said she hopes that P.S. 59 students will get help understanding why slavery is a much more serious issue than these simple math problems.

Sure, just at the expense of turning the school upside down in the process. NY1 was at the school last week. The principal has to do damage control. Teachers will be walking on eggshells for the foreseeable future. You tell me: will this be a net loss or net gain for the children? Do you really believe Ms. Harding accomplished her mission in getting students to understand why slavery is such a serious issue?

There promises to be even more fallout from McIlwain’s ill-conceived phone call to the media:

After seeing NY1’s story, State Senator Simcha Felder, who is the chairman of the New York City Education Sub-Committee, emailed a statement that read, “While the city, state and unions are busy haggling over teacher evaluations, New York City’s students are being subjected to reprehensible and irresponsible educational materials. I am calling for the immediate removal of these two teachers.”

Yes, someone’s head must roll for this.

Either Harding and McIliwain are really bad or really stupid people. Perhaps they are both. If McIlwain is an education professor, someone who is an “expert” on schooling who presumably went through the infantile process to receive an ED.d, he has not the foggiest idea of how the media and the school system work. If his goal was to help children, he has accomplished exactly the opposite.

As for Aziza Harding, it is great to be outraged about things, is it not? It is so easy and costs absolutely nothing on your end. You can have a knee-jerk reaction to something, ring the alarm bells and end up being quoted in the media as some sort of enlightened crusader for justice.

Next time, why not actually talk to the teacher first? Furthermore, in the age of Google where employers are sure to look up anyone they are considering for a job, what principal is going to want an oversensitive, media-hungry nooblet on their staff?

Not to worry, I am sure there are a few charter schools who would love to hire you for three years before spitting you out like bubble gum that has lost its flavor. Then maybe you can get a taste of how it feels to be on the receiving end of the process you help set in motion on others.

16 responses to “THE REAL STORY IN THE MATH SLAVERY FIASCO”