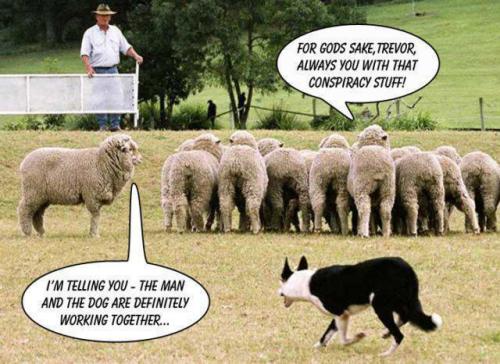 The internet has enabled a whole new generation of kooky conspiracy theories.

As a student of history, I enjoy a good conspiracy. If we take the elastic definition of a conspiracy being a plan hatched between two or more people, then history is filled with them. However, modern-day conspiracy theory is the stuff of fantasy. The Illuminati, 9/11 “Truth” and practically every theory uttered by Alex Jones is part of this fantasy world. Conspiracy theories serve a valuable purpose for the power structure. They take people’s righteous anger against injustice and redirect it towards dead ends. In this way, they serve to deflect real challenges to the system.

Last year, I was reminded of another valuable purpose of conspiracy theories. I made a comment on a friend’s Facebook page about 9/11 being used as an excuse to attack Iraq. This, I assumed, was more or less an established fact. Yet, someone I did not know retorted that I was one of “those” crazy conspiracy nuts. Rather than try to explain myself out of a corner, I dismissed the person’s comment for the drivel it was. However, it was a reminder that conspiracies serve to delegitimize substantive criticisms of the existing order.

Part of the reason why people like Alex Jones are so appealing, and so dangerous, is that there is a certain amount of truth to what they say. There are many facts interlaced within Alex Jones’ phantasmagorical rants. The problem lies in the way he arranges and interprets those facts. If Congress starts debating gun control in the wake of the Newtown tragedy, then it must mean that Newtown was a “false flag” operation designed to give the government an excuse to infringe on 2nd Amendment rights. Furthermore, the sweep of what people like Alex Jones say is more or less true. Our rights are being eroded. Our democracy is getting weaker. The Average Joe is losing ground. The future for many of us does look bleak. People have a visceral sense that something is wrong with our country. Alex Jones and others prey upon that general feeling to paint a simplified version of a much more complex reality, while enriching themselves in the process.

Existing on another conspiracy plane are the Glen Beck types. Instead of an all-powerful Illuminati controlling everything, he believes there is some vast liberal conspiracy to take over the world. In this version, Obama is the leading edge of a Marxist intellectual elitist liberal socialist Muslim radical plot to destroy the United States. There is a pronounced streak of conspiratorial thinking in the entire Tea Party movement.

Unfortunately, the Glen Becks and Tea Partiers of America are making it difficult to oppose the Common Core State Standards. Featured in the Huffington Post’s Education section is the story of Janet Wilson. Janet Wilson is a mother from Upstate New York who helped start a protest where parents will keep their kids home on November 18 to show their disapproval of the Common Core. The Huffington Post makes much of the fact that the woman is a Christian who sees it as her God-given duty to stop the Common Core. The piece goes on to point out some other critics of the CCSS:

Wilson is part of what she sees as a growing movement of parents speaking out against the Common Core Standards. Groups like Americans For Prosperity have sponsored previous anti-Common Core efforts, but Wilson is operating on the grassroots level.

Later in the article is quoted a supporter of the Common Core:

Petrilli, who has come out in favor of the standards, said that in his experience some of the most vocal Common Core opponents do not have their children in public schools. Notably, Wilson said that she is going to home-school her child, who is not yet school-aged.

The inference that the Huffington Post makes in this article is undeniable: critics of the Common Core are fringe right-wing kooks and idiots. Reasonable people on the right and left support it.

Judging from the comments, the article had its desired effect. Here are just some of the reactions of Huff Po’s left-leaning readership to Janet Wilson:

“No wonder why they remain uneducated…”

“Without a doubt, this lady has not once looked at the Standards themselves. She is simply following the hysteria from the talking heads.

Anyone who 1) Is rational and 2) is honest would look at those standards and say they are good and reasonable. They may be tough to teach at some grade levels, but one needs to start somewhere!

Being able to read in context, express ideas, accurately describe the way an idea is communicated — those are very good things.

But the Fundamentalist community hates and fears education. For them, education which teaches children to think, to question, to analyze, and to investigate is dangerous. They want to teach children to memorize, to accept rules blindly because they are the rules, and to never investigate otherwise. To do so is to question authority.

Education teaches us that our parents — and even our teachers — can be wrong and often are wrong. As parents and teachers, we should want our children and students to understand what we are teaching them, but also to go beyond, to create knowledge and understanding in better ways. Those who do not want that have missed the point altogether.

The more I look at the Common Core, the more I like it. It is not perfect, but it is an improvement over the chaos that rules state curricula.”

Glen Beck himself has contributed to this impression that people have of CCSS’s opponents. Beck began one of his criticisms of the Common Core by saying “it is how every Marxist utopia begins.” In his mind, Common Core is “indoctrination”. Of course, the implication is that it is indoctrination into a Godless Marxist frame of mind that will brainwash the next generation with sinister values.

At one point I believed that it would be useful for educators to make common cause with Tea Partiers against the Common Core. However, the twisted logic of people like Glen Beck can only serve to hamper our efforts. Like most conspiracy theories, their ideas can only delegitimize our own very real and very substantial fears about the Common Core.

Sometimes all that matters is that two groups who otherwise disagree on most other things can make common cause against a perceived evil. In this case, the reasons why many people on the right oppose the Common Core can be toxic. They run the risk of making any criticism a laughing stock. Educators need to distance themselves from these people immediately. We need to expressly say that we are not with those people over there who believe that the CCSS is some evil Marxist plot.

That is not to say we cannot make common cause with people on the right. I am sure there are plenty of conservatives who oppose CCSS on the grounds that it violates some sacred wall of federalism. While we do not have to agree with their reasoning, at least this line of thinking is not totally guano insane that it will make anyone associated with them look like members of the tin foil hat club.

Not only are these kooky fears about the Common Core dangerous in and of themselves, they are dangerous when contrasted with those who support the Common Core. President Obama, Republican governors and leaders in business and government are all on board. Anyone not familiar with education policy can look around and draw the conclusion that all of the reasonable people are for it. Hearing the likes of Glen Beck would only confirm their suspicions that it is nut jobs who oppose such a common sense thing as “raising standards” for students.

Most importantly, we need to tell the history of national standards. In the 1990s, the movement for national standards was tied to the movement for equitable school funding. It was a way to improve education in states that suffered from the legacy of Jim Crow, as well as de facto segregation. In short, national standards used to be a movement for social justice. However, we have discarded the prospect of equitable funding to the point that it is not even part of the discourse anymore. All we are left with are a bunch of poorly thought out, developmentally inappropriate “standards” that will do nothing but narrow the curriculum and institutionalize a two-tiered education system: the wealthy get a broad curriculum and the rest get Common Core.

We must hammer this point home every chance we get. More than anything else, it will differentiate us from the Tea Party conspiracies. It will put us back on the right side of the debate. It will win over so-called “liberals” and people associated with the “reasonable center” (the gooey center, in reality).

Sometimes it is not productive to take on strange bedfellows. We might wake up the next morning with regrets.